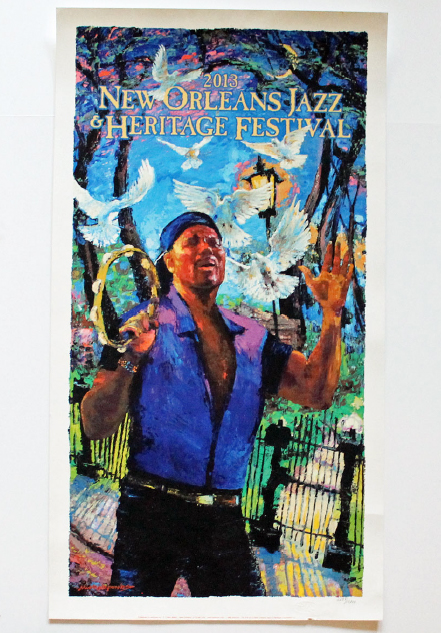 Heart Song: A Portrait of Aaron Neville by James Michalopoulos

In 1960, a teenager named Aaron Neville with the voice of an angel joined brother Art in the family music business. Art had a 1954 hit with the Hawketts’ classic, “Mardi Gras Mambo.” Despite this early success, Aaron was working as a longshoreman when Hawkett George Davis came calling in 1965 with a song he co-wrote, “Tell It Like It Is.” Getting no takers for the recording from any big label, Davis started Par-lo Records and pressed 2,000 copies of it in late 1966. Aaron’s vocalization went on to own #1 on the R & B chart for a month. #2 on Billboard’s Hot 100 for 14 weeks and is #391 on Rolling Stone’s soo Greatest Songs. The docks would have to make do without Aaron who earned more gold in 1989 for “Don’t Know Much,” (#2 on the Pop charts) and 1991 with  Everybody Plays the Fool,” a top-10 Pop hit. Aaron Neville’s modulating vibrato tenor falsetto is the greatest instrument born in New Orleans. And he keeps it finely polished, as evidenced by the just-released “My True Story,” his Blue Note album debut produced by Keith Richards and Don Was.
James Michalopoulos’ deeply felt portrait distills Aaron’s twin inspirations: New Orleans and spirituality. The city is fully captured by the artist’s distinguished minimalist architectural elements, a wrought iron fence and gas lampposts. Ethereal doves embody spirits set aflutter by an angelic voice. Trees bow in nature’s embrace, .and of course, a yellow moon tops the harmoniously lighted dusk scene. Michalopoulos has created five definitive contributions to this, the world’s most collected poster series UF98, JF01, JF03, JF06 & JF09J including three of its most valuable. Michalopoulos is a celebrated representational New Orleans artist best known for his spiritually imbued architectural renderings. His vivid pigmentation is fully realized in this silkscreen printing, which applies each color individually to museum standard papers. Michalopoulos exhibits extensively in the art capitals of Europe and the United States. He maintains studios and galleries in Burgundy France and New Orleans. 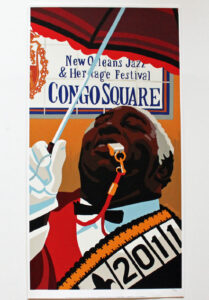 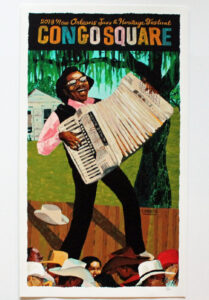 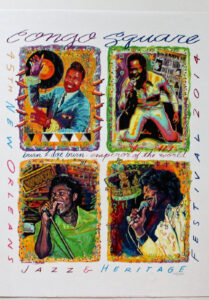 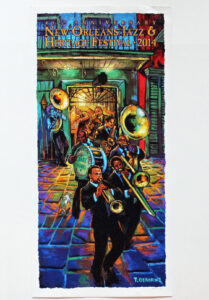 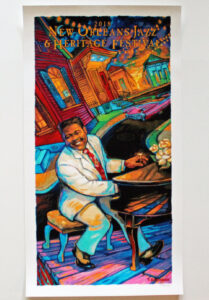